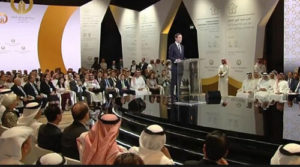 In first, a U.S. president crosses DMZ into North Korea