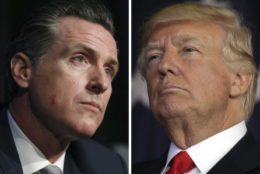 Back to the future: Critics connect John Wayne’s 1971 comments to none other than Donald Trump