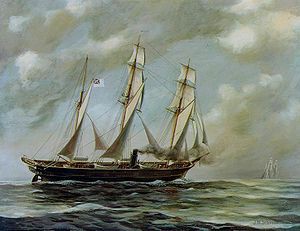 Painting of the CSS Alabama from the U.S. Navy’s Naval Historical Center.

At the beginning of the War, the Confederate Navy, with only ten serviceable warships, was less than one-ninth the size of the Union Navy. How could a single Confederate commerce raider, the CSS Alabama, so terrorize U.S. merchant shipping companies and utterly frustrate one of the most powerful navies in the world?

By the end of February 1863, the Confederate cruiser Alabama was operating off the coast of northern Brazil. That month her crew boarded 31 ships that her Captain, Raphael Semmes, believed to be Yankee merchants, but only five of them turned out to be of U.S. registration. He burned three of these, bonded one, and ransomed one. The U.S. merchant captains had learned to avoid the busiest sea lanes where the Alabama might be lurking like a wolf for her next prize. After re-coaling at a Brazilian port, Semmes set sail for Cape Town, South Africa, a rich British colony and a more likely location for intercepting Yankee merchant ships.

Meanwhile, Secretary of the Navy Gideon Welles kept sending his interception squadrons to the last place the Alabama had struck rather than trying to anticipate what rich sea lane she might try to attack next. By the time the Union Navy was on the scene of the Alabama’s latest plundering spree, Semmes was somewhere else. Welles, his staff, and the Lincoln Cabinet—distressed over the Alabama’s continued disruption of U.S. shipping—sometimes allowed the latest rumors and hearsay in Washington to influence naval tactics. Because of continual political interference in military and naval affairs, especially during any crisis or following a setback, Confederate agents found it easier to influence Union Navy operational decisions by spreading misinformation and false rumors.

Captured ships were Semmes’ principal way of getting news of shipping and the progress of the war. On March 2, the Alabama captured and burned the John A. Parks out of Maine. From Northern newspapers confiscated from her captain, Semmes and his crew learned that the Florida, the second Confederate cruiser built by the British in Liverpool under the supervision of James Bulloch, had burned the Jacob Bell and a cargo valued at $1.5 million, the largest trophy of the entire war.

The officers of the British-built Confederate cruisers were mostly Confederate Navy personnel, but their crews were largely British volunteers. Late in the war the Alabama and the Florida would be joined by a third Confederate Cruiser built in Liverpool, the Shenandoah. When the Shenandoah finally lowered her ensign at Liverpool on November 6, 1865, more than six months after Lee’s surrender at Appomattox, she had captured 34 U.S. merchant ships and whalers, most of which were burned at sea.

When the Alabama arrived at Cape Town, South Africa, in the summer of 1863, she was the most famous ship in the world and the most dreaded ship in the counsels of Union government and the U.S. shipping industry. Just before coming into the harbor at Cape Town, in the full view of many on the shore, the Alabama raised her Confederate ensign and chased down and captured the Union merchant, Sea Bride. Semmes decided, however, that the Sea Bride would not join the 43 ships the Alabama had burned at sea. After transferring the Sea Bride’s crew to the Alabama, he assigned a small crew to bring his prize into Cape Town for sale. Word traveled fast in the British governed Anglo-Dutch city that the famous Alabama had arrived with a Yankee prize in tow.

As the Alabama anchored in Cape Town harbor, her executive officer, John Kell, described the scene in a letter to his wife:

“It was really wonderful to behold the people congregated on shore, the hillsides covered with an excited populace….Hundreds crowded on board. Their enthusiasm was beyond description and their hearty welcome and sympathy expressed for our cause was truly gratifying.”

The jetties and streets near the harbor area were thronged with people there to welcome these famous sea-knights and their storied ship. From upper windows, ladies waved their handkerchiefs as if to fair knights resplendent on their chargers. Many people stood on the roofs of houses to get a better view. Disregarding even the pretense of official British neutrality, the crowd gave three great cheers for the Alabama.

Captain Charles White of the captured Sea Bride, when interviewed by a local newspaper, was resigned to his loss and remarked:

“What can’t be cured must be endured. I had not the remotest idea of a capture at this end of the world. I never supposed that she was in this direction.”

Another Confederate ship followed the Alabama into Cape Town harbor. She was the Tuscaloosa, formerly the U.S. bark Conrad taken by Semmes off Brazil. Semmes had made her a tender for his own ship. Equipped with two guns and a small crew of fifteen, she was effectively a small Confederate cruiser.

After four days of celebration and re-supply at Cape Town, the Alabama steamed out of Table Bay. She was already the most successful commerce raider in naval history.

But 2,200 miles to the northwest, the Union warship Vanderbilt, commanded by Charles Baldwin, was just arriving at the island of St. Helena. She was the biggest and fastest vessel in the U.S. Navy. Her mission was to find and destroy the Alabama. Captain Baldwin’s instructions were personally delivered to him by Assistant Secretary of the Navy Gustavus Fox, a personal confidant of President Abraham Lincoln. On August 15-16, a U.S. consul and a Danish schooner confirmed that both the Confederate cruisers Georgia and Alabama were operating out of Simon’s Bay just east of Cape Town.

Arriving at Simon’s Bay, the Vanderbilt found she had missed the Georgia by just 18 hours. The Alabama was operating off the west coast of Africa about 600 miles to the north and in route back to Simon’s Bay. Semmes had no idea that the powerful Vanderbilt was there. Luckily, weather delayed his arrival until the Vanderbilt had left. Now the chase was on and both crews knew that deadly combat might be just hours or even minutes away.

One night about 10 PM in thick weather, the watch on the Alabama heard a nearby vessel strike four bells. Through night field glasses they identified her as the Vanderbilt. The low-riding, black-painted Alabama, her crew in hushed silence, stole away from the larger Union warship and headed due south for two days. Baldwin guessed wrong and headed north. The elusive Alabama had disappeared again. With the Vanderbilt lurking around the Cape, Semmes set sail for Singapore.

In New York, news of the Alabama’s exploits and escape in the Cape of Good Hope inspired a dime novel. Published in the fall of 1863, it was entitled: The Track of Fire; or A Cruise with the Pirate Semmes.

By early 1864, the war news from home was not good, but Semmes continued raiding in the Indian Ocean and had a narrow brush with the Union warship Wyoming. But the Alabama’s steam engine and water condenser had begun to fall into disrepair. Since there were no dependably friendly ports where major repairs could be made, Semmes headed back to Cape Town. On March 25, 1864, after re-supplying, he set sail for Brazil but found only two prizes. By this time he realized his ship’s speed and efficiency were deteriorating. She would need serious repairs in a friendly port with the proper materials and skilled labor.

Often our readers have comments they wish to make in response to commentaries in The Tribune Papers.
We welcome such response.
Please e-mail them to
editor@thetribunepapers.com

ABOUT THE AUTHOR   –  Mike Scruggs, Author and Columnist

Mike Scruggs is the author of two books: The Un-Civil War: Shattering the Historical Myths; and Lessons from the Vietnam War: Truths the Media Never Told You, and over 600 articles on military history, national security, intelligent design, genealogical genetics, immigration, current political affairs, Islam, and the Middle East.

He holds a BS degree from the University of Georgia and an MBA from Stanford University. A former USAF intelligence officer and Air Commando, he is a decorated combat veteran of the Vietnam War, and holds the Distinguished Flying Cross, Purple Heart, and Air Medal. He is a retired First Vice President for a major national financial services firm and former Chairman of the Board of a classical Christian school. 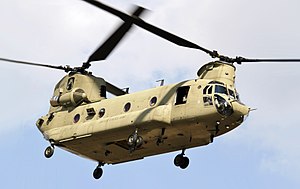 States’ Rights and the Survival of American Freedom 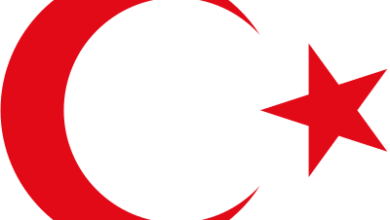